In today’s comparison of Trezor T vs Ledger Nano X, we will be looking into the features each wallet has to offer and which one is the best in 2019.

As time has passed, both wallets have launched newer versions of their products: The Ledger Nano X and Trezor Model T.

Trezor and Ledger are both respected hardware wallet manufacturers, and both companies are trying to stay ahead of the game with their products.

Ledger Nano X allows users to store, send, and receive more than 1100 cryptocurrencies and tokens. But keep in mind that Ledger has native support for only 22 cryptos, while the rest require third-party apps to support the coins on the device.

Trezor T supports 1000+ cryptocurrencies and tokens, but its own native client supports over 50 cryptos.

While the Ledger Nano X supports the most coins, Trezor T supports more coins on its native client.

The wallets can be purchased from users all over the world. The only geographical restriction would be if the retailer supports shipping to that specific country.

Trezor T is also compatible with major desktop OS (Windows t+, macOS 10.11+, Linux) and can be used on Android devices. The wallet does not feature support for iOS devices.

In terms of compatibility with third-party apps, in the Trezor T vs Ledger Nano X comparison, the winner is clearly Trezor, as it supports MyCrypto Wallet, MyEtherWallet, Electrum Dash, Electrum, Metamask, Mycelium, Copay, Sentinel, AdaLite, while Ledger is only compatible with a few.

One important feature of hardware wallets is the size and clarity of the screen, and both wallets have made considerable strides in upgrading their screens in their newest models.

Considering their design, Trezor T has a larger screen than Ledger, but this does leave the device looking slightly bulkier. Even though Trezor seems larger than Ledger, it’s almost less than half its weight. However, both are really small and light, no heavier than a keychain accessory.

While both Trezor and Ledger have physical buttons, Model T also features a touchscreen.

In terms of mobility, Ledger Nano X is at an advantage, as the device is powered by a battery and also includes a Bluetooth feature. 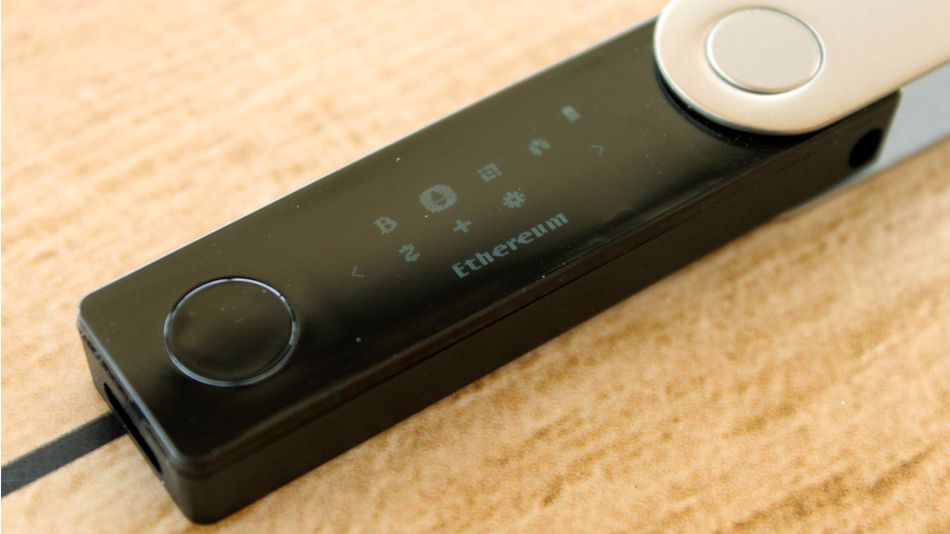 Ledger Nano X has a 100 mAh battery (that is why the device is heavier), which allows it to work unplugged for up to five hours. The battery life is five years. The device’s Bluetooth feature allow you to connect the wallet to your iOS and Android smartphones without requiring any USB cables.

Whereas Trezor T lacks a battery, which I think is pre-requisite for becoming a truly mobile device. Further, it doesn’t support wireless connectivity, but you can surely use Trezor Model T on your android device using the USB C type or a connector. This wallet doesn’t support iOS mobile devices.

The design and appearance of these two wallets greatly differ. Trezor devices are constructed mostly out of plastic, while Ledger’s casing is built out of aluminum and stainless steel.

While this makes Ledger Nano X look sleeker, the important advantage is that the steel will offer more protection to external factors and potential damage. So, in this aspect, in the Trezor T and Ledger Nano X comparation, the Ledger wins an extra point.

Even if both devices have very sturdy builds, we can see that the Ledger Nano X is more durable than the Trezor model T.

How to Get Trezor T and Ledger Nano X

The setup for Trezor Model T is even more simple:

Both Trezor and Ledger can be connected through USB C-type ports and come with USB-C connectors in their package.

How to Use Ledger Nano X

How to Use Trezor T

Keep in mind that not all coins on Trezor have native support, but with over 50 options, you have where to choose from.

In terms of setup and usage in the Trezor T vs Ledger Nano X battle, Trezor T comes out as the victor, as it is easier to set up and use.

There are no fees for sending and receiving coins between your wallets. Ledger Nano X is sold at $119, while the Trezor model T is sold at a heftier price of $169. Both older models of Ledger and Trezor (Model one and Nano S) are sold at around $50.

Both wallets take security to another level. Ledger Nano X integrates a dual chip architecture where they implement a general-purpose MCU in addition to another secure element, MCU (SE MCU).

The secure element keeps your seed/private keys safe, and the other MCU works as an abstraction layer to enable communication between the SE and the smartphone/desktop of the user.

The MCUs run a BOLOS operating system, which is an in-house developed system of Ledger SAS, that is a closed-source code.

Both Ledger Nano X and Trezor T are secured by PIN code, which requires physical input on your device in order to gain access to your wallet. Ledger generates a 24-word seed, while Trezor a 12-word seed when creating a new wallet. These seeds serve as a backup to your wallet and, through the use of the screen, you can review the phrase and addresses without exposing them to a computer.

Trezor Model T only uses one chip or one micro-controller for creating and storing private keys. Trezor is CE and RoHS certified, which meets all quality, reliability, and environmental standards. The technology on which Trezor is based is completely open-source.

While some argue that the open-source system is more reliable, as it is peer-reviewed, closed systems are more difficult to access by attackers. But a closed system could also mean that the code could be exploited through unknown vulnerabilities that will be discovered much later as compared to open source codes.

So, in terms of the Trezor T vs Nano X security, Ledger is more advantaged.

Back in March 2019, Ledger revealed that its security team found a vulnerability in Trezor wallets, which allowed them to hack into the device because of a lack of a secure element. But, the main issues were quickly patched up. Trezor responded with a blog post describing the rather erroneous nature of Ledger Nano’s claims.

Customers can reach Trezor and Ledger’s support team through contact forms, or by browsing through their sites’ FAQ sections.

Trezor and Ledger have been for many years in the crypto storage business, and so far, the general opinions regarding their products have largely been positive.

The Trezor Model T and Ledger Nano X are both the newest iterations of two well-known hardware manufacturers. Whatever wallet you choose, your cryptos are bound to be safe.

Top Crypto Airdrops You Should Look Out for in March 2021
Are you looking for crypto airdrops that can give you some free cryptocurrencies? Look no further. This article highlights th...
Published under:
Analysis
Read More

Featured
How Safe Is It to Bet with Cryptocurrency?
The use of cryptocurrencies like Bitcoin in the gambling industry has grown significantly in the past few years. Initially, t...
Published under:
Analysis
Read More
We Recommend
Project Reviews

Hotbit Exchange Review | Fees, Security, Pros and Cons
( One rating )
Hotbit exchange is one of the most popular cryptocurrency trading...

Margex Exchange Review: Is It a Safe Exchange?
( One rating )
Margex is a next-gen Bitcoin-based derivatives trading platform,...
Editor’s Choice

How Online Gambling with Cryptocurrency Works
By Ionela C. on Feb 22, 2021