The decentralized internet is here, with a positive NKN price prediction thesis. Privacy advocates have long celebrated blockchain technology as the last piece in the puzzle to circumvent tech giants with apps using encrypted data stored on networks of computers.

Adoption is changing the result of this push for a decentralized internet. The New Kind of Network (NKN) is building the infrastructure for opening up the World Wide Web through blockchain and putting power and control back into the hands of the users.

At the time of writing this NKN price prediction, NKN was trading at $0.5196, according to data from CoinMarketCap. This price brings the market cap of the network to around $357 million and a fully diluted market cap of $511 million.

Alone, these figure means nothing, but by applying a proven price prediction formula, we can find the most accurate NKN price prediction. Unfortunately, the biggest tech companies have found the roots of their success in privacy and data scandals. NKN is here to change that.

The advantages of a decentralized internet are evident to the individual, but they seem counterintuitive for internet companies. This network is making slow but steady progress attracting significant user numbers due to user experience flaws, but it’s too early to spell out a death sentence.

The New Kind of Network token price might slide below $0.50 to collect liquidity rest around $0.45 and the support level at $0.3523. NKN price prediction looks to be showing a slightly bullish reaction as it nears the support floor. This uptick in NKN buying pressure could be a lure as the New Kind of Network token traders need to be aware of the potential wick to the downside.

NKN price has been on a downswing for a rough three weeks and shows signs of a pending reversal as it hovers above $0.3523. While the 40% correction seems done, there is a small chance NKN might dive lower to open up a buying opportunity and invite more buy orders and fill the fair value gat at $0.55.

This NKN price prediction move will provide the buyers with a perfect opportunity to accumulate NKN coins at a discount. Regardless of how far below it drops to, investors can expect NKN price to kick start an upswing toward $0.70, beginning with a long-due campaign to break past $0.6979 and build off this move to launch for $1.

In the short run, NKN price prediction is bearish. The upswing to follow would constitute a 30% climb from $0.55 or 39% from $0.40. In some cases, NKN could extend momentum to the $0.95 and $0.98 resistance barriers. While things are looking up for the NKN coin, a breakdown from the $0.3594 support floor will indicate a weakness among the buyers and increased profit-taking. This move will also invalidate the bullish NKN thesis.

Gov.Capital NKN price forecast for November – December suggests pressure remains at the crucial barrier at $0.70, which could force a retest of support line as the price falls to $0.4777. However, this forecast remains optimistic of a bullish end-month price. For 2022, this NKN price prediction determines a steep climb looms. Its NKN price forecast for the next year at $0.9729 by April 2022. The NKN price prediction for the rest of the year is set to hover above $0.69.

MindYourCrypto NKN price prediction is bullish as more corrections appear on the horizon. This analysis presents a NKN price forecast for November – December as the last call before NKN begins the climb to break past $0.70, with support settling at $0.6325. However, the forecast floats a thesis that the rest of the support at $0.5136 could be the final signal for a bullish NKN price forecast for the next year should it hold the selling pressure.

NKN provides the perfect buy opportunity at $0.5136 as it builds the foundation for a 50% breakout in 2022. The trading community appears united on this prediction; suggest NKN price teeters on the edge of making explosive gains and another stab at registering a new all-time high somewhere north of $1.5. The NKN price forecast for the rest of the year 2022 shows increased chances of a bullish continuation as critical resistance barriers are flipped for support.

In the meantime, a short-term bearish outlook as traders eyeing to buy in the dip move to generate enough trade volumes to shatter the resistance barrier consolidate. The bulls are looking to set a new high at $1 and kick-start 100% ascent to retest a six-month-old barrier at $0.9529. NKN looks ready for the show of strength after the losing strength. All in all, the NKN price prediction, according to market experts and influencers, is bullish.

NKN price prediction of the month of October had been bearish in the midst of some good developments. The network has witnessed some growth in the number of dApps built for the decentralized web powered by NKN. The application are essential if the network is to receive widespread adoption and for the decentralized internet to gain acceptance in the world as the better alternative.

The growth of any blockchain network is driven externally by adoptions of its token for several use cases. Hence, the NKN network has been running hackathons for it dApp developers. The recent winner was nRide, a fascinating dApp developed to become an open, free, and decentralized Uber-like ridesharing Service. The dApp will be fully powered by the NKN networks as an initiative to bring everyday internet use cases to the decentralized web.

Unlike popular ride-hailing service applications like Uber, nRide implements a p2p protocol. This system will run over NKN network to connect riders and drivers directly. The goal is to eliminate the middleman to reduce platform fees. If Web 3.0 is the future of the World Wide Web, then NKN is well-positioned to capture and sustain the much-needed infrastructure of the network.

The goal of NKN is to build a decentralized version of the internet where no single authority is in control, always depended on by the users. On top of that, NKN is building the infrastructure and supporting the development of applications to run on the network. Every NKN price prediction is subject to the trader’s perception of the network’s ability to accomplish this goal. So far, NKN is on track to achieve every milestone on the road to internet decentralization.

Here we must conclude from our point of view how that currency could perform in 2021, taking into account all the Even though NKN is down more than 50% from the all-time high it set earlier in 2021, investors have plenty of reason to remain bullish in 2022. There does not appear to be any single cause for a bearish NKN price prediction, with analysts slighting a short dip before the start of a new trend.

Australia Is Leading the Renewable Blockchain Project Market
Renewable energy and sustainability have been a key focus area amid the growing climate change movement and concerns over the...
Published under:
Analysis
Read More 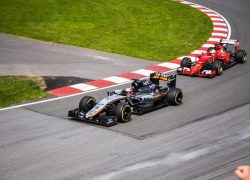 Crypto Sports Betting in Formula 1
Various racing sports exist, of which the most popular include NASCAR, MotoGP, and Formula 1. However, amongst them all, Form...
Published under:
Analysis
Read More
We Recommend
Advertisement
Advertise with us
Project Reviews