Cryptocurrency is the center of attraction now with the recent bull market. There are many more investors coming into the space and buying different assets. Some of these investors are quite knowledgeable about digital assets, while some are just starting out. Regardless of the category you belong to, there is one thing to consider, the security of your assets, especially when talking about some of the most popular ones, such as XRP.

There are hackers and other cybercriminals who are constantly looking for ways to steal your crypto from you. Therefore, no matter which asset you are investing in, it is critical that you find a way to store it safely. The security of the assets depends on the kind of wallet you store them in. There are many of them, but you may be looking for only the best XRP wallet. Well, this is what this article is about, so read on.

Factors to Consider When Choosing the Best XRP Wallet

XRP support: Of course, the wallet must support XRP since it is the primary asset you wish to store in the wallet.

Multi-currency support: Even if this is not necessary, you may wish to have a multi-currency wallet, which allows you to convert your assets into other ones at some point if you so wish.

Ease of use: This is especially important for beginners. You don’t want to end up with a wallet that you need a third party to operate.

Security: How secure is the wallet? You should look for a wallet with high-security ranking so that you don’t get to miss your XRP.

User reviews: All the above information can easily be accessed by reading the reviews of those who have used the wallet before. Look for such reviews before choosing which wallet to use.

Without any further delay, let’s consider the best XRP wallets you should use.

It’s one of the best Ripple wallets with at least 3.5 billion users. Atomic Wallet supports more than 300 cryptocurrencies, including XRP. It can also function on Linux, Windows, and Mac operating systems. The wallet allows you to carry out cryptocurrency transactions and even those that could use a bank card.

Another advantage of Atomic Wallet is that the user gets a chance to win rewards after validating transactions. It’s convenient and straightforward to use this wallet because you can install it on your phone. Those in the XRP business recommend it due to the features it contains and, most of all, a smooth user interface.

The wallet can store all of your information, including blockchain balances, with a private key that is unique to you. This particular key is formed out of a mnemonic seed. An Atomic wallet guarantees safety and control whenever you choose to use it.

This belongs to a category known as cold wallets. Because they are not connected to the internet at all times, it is significantly more difficult for hackers to reach it. The wallet is like a USB memory stick and can be easily carried in your pocket wherever you go.

Ledger Nano X also supports multiple cryptocurrencies and does not place any limit on how much XRP you can hold. This is very convenient as you can own any quantity you want without having multiple wallets. The private keys for the wallet are stored offline, so your XRP is as secure as it gets.

Guarda is an Estonian-based wallet provider, that offers support for a wide variety of cryptocurrencies. In addition to XRP, the wallet also supports 40+ coins such as Bitcoin, Bitcoin Cash, Litecoin, Ethereum, Dash, Monero, NEM, NEO, EOS and many others.

Guarda has apps for most major desktop and mobile operating systems, as well as a web and chrome extension.

The wallet also has incorporated multiple services for crypto management such as a built-in crypto exchange, direct fiat purchases for crypto and Guarda Token Generator.

Guarda is a non-custodial wallet, meaning that only you have access and can manage your private keys. All keys and backups are encrypted via Advanced Encryption Standard (AES).

KeepKey is a cryptocurrency wallet developed by cryptocurrency exchange ShapeShift. It is one of the best XRP wallets and also one of the safest. The wallet was designed to interact with ShapeShift interface for trading with zero commission fees. It supports every major cryptocurrency, including XRP, and more assets are added continuously.

Notably, the KeepKey wallet has a very simple user interface, which makes it the preferred wallet for beginners. This hardware wallet is also highly secure because it uses a random number generator to generate private keys. If you are looking for the best XRP wallet, this could be a good choice, especially if you are a beginner.

GateHub is a hot wallet for storing multiple cryptocurrencies, including XRP. The company behind it, GatHub.net is built on the XRP Ledger protocol and allows you to send, receive, and trade digital assets. GateHub is one of the most trusted wallets when it comes to XRP and also very easy to use.

However, it requires a minimum of 20XRP to work. Receiving and transferring XRP can be done very easily to and from the wallet. One thing to note is that hot wallets are far more prone to attacks than cold wallets, such as Ledger Nano X or KeepKey. It is advisable to hold a limited amount of XRP here so that you don’t draw attention to yourself.

Not everyone likes to use a hardware wallet though, so if you are willing to risk it all, you may wish to try using GateHub for easy analysis of market trends and use of your XRP.

This is another wallet from the french Bitcoin security company, Ledger. It is very similar to the Ledger Nano X, but much cheaper. Like the Nano X, it requires a device such as a laptop computer to function, just like a flash drive. It supports many cryptocurrencies, including an unlimited amount of XRP.

Of course, Ledger Nano S is one of the most secure wallets for storing XRP as well as any other asset. With it, hackers will have a hard time getting to your XRP, which will be offline most of the time. You will only connect it to a computer when sending or receiving cryptocurrencies. It also has a very simple user interface when connected, meaning that even an absolute beginner can use it successfully. Talking about the best XRP wallet, this is one option to look at.

If you want the best XRP wallet, Toast is a good option for you. It is available both on desktop and mobile devices, so you can carry your XRP with you wherever you go. It works across all devices and operating systems, including iOS, Android, Windows, Mac, and Linux.

An outstanding characteristic of the Toast wallet is its simplicity. It has such a simple UI that anyone capable of operating a phone or computer can use it seamlessly. All encrypted keys for the wallet are generated on the device and never leave it, which makes it more secure than the average hot wallet. All the users’ information remains on the device without being moved online to make sure they are safe.

These are the top wallets when it comes to XRP storage. If you are looking for the best XRP wallet, you can choose from them, especially the hardware wallets, if security is very important to you.

Note: This post was originally published on 14 April 2020 and has been totally updated for the completeness and veracity of the content on 10 March 2021. 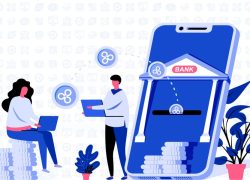 How to Create a Ripple (XRP) Wallet | Beginner’s Guide
As the cryptocurrency market is starting to gain attention once again after Bitcoin (BTC) surpassed $15,000, users are trying...
Published under:
Blockchain Guides & Tutorials
Read More
We Recommend
Advertisement
Advertise with us
Project Reviews