One of the “largest blockchain-based operating systems in the world” as described on the website, TRON, launched a 9,000,000 TRX airdrop.

TRON‘s value is up by 8.57% following the TRX listing on Line’s Bitbox cryptocurrency exchange. To celebrate the new collaboration, the company announced a 9,000,000 TRX airdrop available until 22nd of August.

Crypto traders investing up to 50,000 TRX have the chance to earn up to 2% per day during the airdrop period. The winners of the event will also be named after the first-come-first-served method. Later, Line’s cryptocurrency exchange Bitbox revealed that investors could gain 2% more on transactions up to 600,000 TRX.

BitTorrent became one of the Tron Super Representatives

The announcement comes in addition to the fact that BitTorrent “just got elected by the community as one of the 27 #TRON Super Representatives“, passing the mandatory 100 million vote limit needed to win the election.

BitTorrent just got elected by the community as one of the 27 #TRON Super Representatives, check out this video and learn more about their team and mission! @BitTorrent $TRX pic.twitter.com/XtJ6E2Arn1

Joe Joyce, chief of engineering at BitTorrent, is excited about the news, thanking the community for their votes. “I want to thank the TRON voting community for electing BitTorrent as a super representative. Everyone here is really excited about being an SR, and we really look forward to working with the other SRs to ensure the future of a decentralized internet.”

A Tron Super Representative is the one who confirms transactions and develops new blocks, being considered a “key network node“.

Advertisement
Advertise with us
Read more articles related to this subject:
BlockchainCrypto AirdropsTokensTRX
Notice: The information in this article and the links provided are for general information purposes only and should not constitute any financial or investment advice. We advise you to do your own research or consult a professional before making financial decisions. Please acknowledge that we are not responsible for any loss caused by any information present on this website.
Continue Reading...

Best NFT Airdrops and Giveaways for July
One way of increasing popularity is by NFT airdrops and NFT giveaways. An airdrop is whereby free NFTs are iss...
Published under:
Analysis
Read More 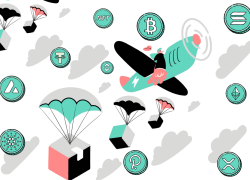