Traditional cargo logistics is one of the most complex industries. It is extremely dependent on the human factor; a lot of manual labor is used in the transportation process. Companies will have to change the freight industry itself to keep up with the competition and support growth. Further optimization of the market for traditional logistics is very limited. Most of efficiency improvements make it possible to reduce only tenths, and sometimes even hundredths of percent of costs, or at best reduce slightly the time spent on delivery.

The future of the industry is unmanned cargo logistics. Such market giants as Google and Amazon have already begun to test using UAVs for small parcels delivery, and UGVs for the service of the warehouse complexes. However, the actual system is not transparent enough. It includes dozens of mediators, and the number of their interactions with each other within a simple delivery can sometimes exceed a hundred or even a few hundreds. Blockchain can help to solve this problem. The technology will naturally fit into the logistics market and will make it more efficient in the very near future. Furthermore, blockchain is necessary for the full implementation of unmanned delivery, whether it is to be done by drones or trucks.

SKYFchain is the first Business-2-Robots Operating Platform in the cargo logistics industry. This is an open blockchain platform to keep and exchange data of all cargo robots’ operations and transactions. Any action on the Operating Platform has its own price depending on the type, frequency, and complexity of the transaction and is denominated in the traditional currency. All transactions within SKYFchain will be processed in SKYFT tokens, as required by the smart contract logic.

SKYFchain is a very dynamic startup growing by leaps and bounds. On the 11th of June, the company’s ICO has reached its Softcap of $5 million. The SKYFchain’s ICO has been highly rated by the most respected ICO trackers including ICOBench, TrackICO, ICObazaar, and many others.

Over the last months, SKYFchain team held hundreds of meetings and negotiations with potential partners and clients building the business network and creating demand for SKYFT tokens among the leading companies, institutions and state entities around the globe. The accumulated knowledge of the market expectations towards our product and business plan helped us create the technical specifications for the Yellow Paper and Minimal Viable Product.

The team has already released the MVP in collaboration with Qiwi Blockchain Technology development office. The first version of SKYFchain Operating Platform is available at mvp.skyfchain.io.

SKYFT token is already agreed to go public with the support of BitForex Exchange. It is remarkable that its managers have decided to list SKYFT tokens while ICO campaign is still alive, ending on August 15th (https://is.gd/CvD1C8). BitForex is one of the biggest and most well-known exchanges on the market with the daily turnover of several hundreds millions USD of crypto assets. It is especially popular in China. Thus, the support of BitForex can help SKYFchain to reach out to the large Chinese crypto community.

Since the number of participants and the number of transactions in the SKYFchain platform will constantly be increasing, while the amount of the tokens is fixed, the cost of the SKYFT token will be increasing as well. The SKYFT tokens holders will receive their share of the cost of every transaction made within the SKYFchain platform. 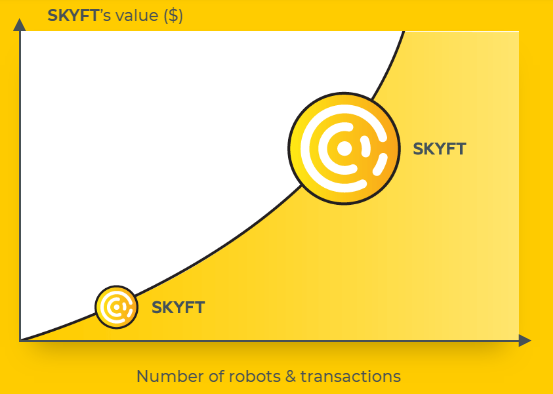 The first cargo robot to start operations on SKYFchain will be SKYF. SKYF will use SKYFchain to operate hundreds of freighter drones that have already been pre-ordered by the most significant oil/gas and logistics companies around the world. SKYFchain is open to any other manufacturers of unmanned drones, including cars and cargo ships. It is also open to logistics providers and financial organizations and has every chance to become a universal tool, a standard for the unmanned logistics industry. Within 5 years, SKYF plans to spend over $50 million to buy SKYFT tokens on the open crypto-exchange. The funds will be used for the further development of SKYFchain. The SKYFT tokens emission conforms the international legislative regulation of the blockchain and is compliant with the SEC of the USA.

What the Wire Act Means for Cryptocurrency

Crypto casinos stand to gain the maximum if the US government decides to implement their renewed views on the Wire...

This week cryptocurrency wallet Lumi celebrated its 3rd anniversary. Last year was extremely busy for Lumi Wallet’s team, as one...