We will be analyzing some of the historical prices and market sentiments for MIOTA in order to formulate an IOTA price prediction for February 2020.

IOTA (IOTA) is a unique DLT platform developed for the Internet of Things, which instead of using blockchain is based on a directed acyclic graph (DAG).

This graph is called Tangle, which is a quantum-proof protocol designed to bring “zero fees, infinite scalability, fast transactions, and secure data transfer” to the ledger.

But starting from January 27th, IOTA started growing once again, closing that day at $0,251298. This surge continued the following days, reaching $0,285681 on January 28th, and by January 29, the price closed at $0.3070. The last few days in January recorded a slight bearish pressure, as the price struggled to keep itself to $0.3 levels. 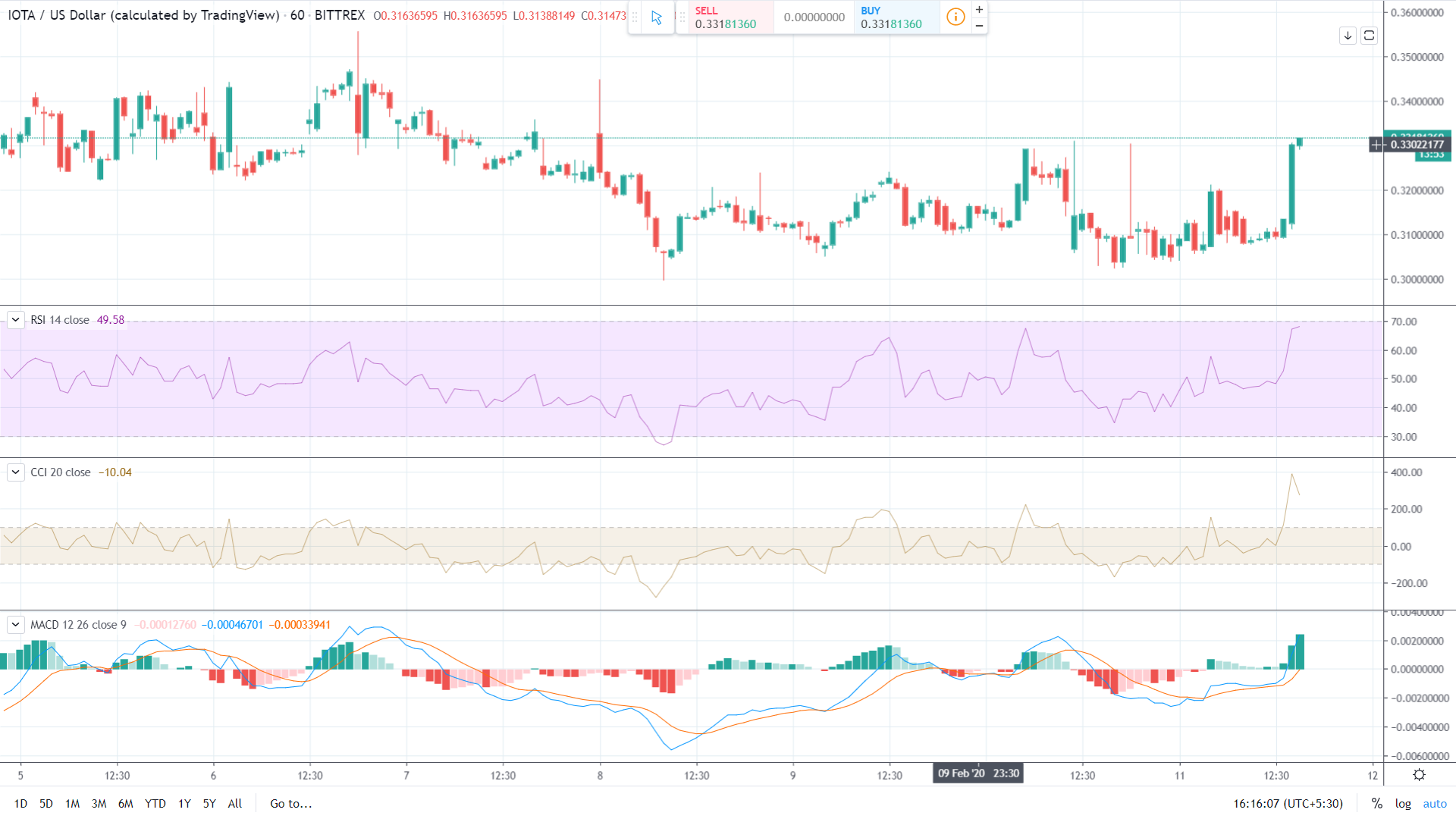 IOTA broke the $0.33 level and is anticipated to continue this uptick in price after it went through an extended period of price corrections.

15 companies are part of the working group, including top companies such as Dell, STMicroelectronics, and the University of Magdeburg.

“The Eclipse Foundation will provide a vendor-neutral governance framework for open collaboration, with IOTA’s scalable, feeless, and permissionless DLT as a base,” said executive director of the Eclipse Foundation, Mike Milinkovich. “By doing so, we will accelerate the development of new applications built with this transformative technology.”

On Feb 9th, through IOTA ‘s collaboration with Lidbot, a new intelligent sensor based on the IOTA Tangle has been launched. The Lidbot sensor will be used mostly in waste management.

In just a few days the first lot of the smart sensors had been sold out. The company tweeted about the first installation:

“Our clients installed their first batch of #sensors at Sentosa Island in #Singapore. Now it’s time to show them how a small sensor can make a huge difference, ensuring that collection is optimized and the island is clean.”

As there are a number of crypto sites that have made their own IOTA price prediction for February, we have decided to include some of these forecasts to help you get a better feel of the market sentiment for MIOTA.

Coinpredictor projected that in February, the price of IOTA will drop by 5.6% which will bring the coin to a price of $0.418853.

WalletInvestor’s IOTA price prediction covers the next 10 days of February, as well as their maximum and minimum daily prices.

Altcoinforecast predicted that IOTA will close the month at a price of $0.35.

Longforecast anticipates that the maximum value for the coin for this month will be $0.41, and the minimum price $0.25. The month’s average price was estimated at $0.34. IOTA’s closing price for the month is $0.38, change for February 26.7%.

This has been our IOTA price prediction for February 2020. We hope that the data and brief analysis we provided will prove useful to you in your upcoming trading ventures involving MIOTA.

Read more articles related to this subject:
MIOTA
Notice: The information in this article and the links provided are for general information purposes only and should not constitute any financial or investment advice. We advise you to do your own research or consult a professional before making financial decisions. Please acknowledge that we are not responsible for any loss caused by any information present on this website.
Continue Reading...

IOTA (MIOTA) Price Prediction and Analysis in April 2020
We will be looking into some of the past prices and market projections for MIOTA in order to develop an IOTA price prediction...
Published under:
IOTA Analysis
IOTA MIOTA
Price at writing: $0.156817
Now: $1.34 751.72%
Read More

Best IOTA Wallets in 2019 | Features, Security, and More
IOTA is a unique cryptocurrency that is based on an alternative blockchain technology called Tangle, designed to be used wit...
Published under:
Blockchain Guides & Tutorials
Read More

IOTA (MIOTA) Price Analysis and Predictions | August 2019
IOTA is a unique project in the crypto world, and in today’s article, we will be looking at some data in order to estab...
Published under:
IOTA Analysis
Read More
We Recommend
Project Reviews

Hotbit Exchange Review | Fees, Security, Pros and Cons
( One rating )
Hotbit exchange is one of the most popular cryptocurrency trading...

Margex Exchange Review: Is It a Safe Exchange?
( One rating )
Margex is a next-gen Bitcoin-based derivatives trading platform,...
Editor’s Choice

Your Crypto Adventure Begins on the Starting Line – The STC Token ICO
By Lavinia C. on Mar 5, 2021