How Tap Coin Plans to Change the Hospitality Game with Blockchain

How many times have we asked ourselves why we need those “bonus points” that we earned from a recent hotel. When do you plan to use them? The most likely answer is you’re uncertain about the value of those points and you don’t even plan to use them before they expire.  Thousands of restaurants, hotels, bars and other venues all across the world have their own loyalty programs that are intended to make the customer return back after their first visit, yet have this exact effect. Leisure outlets fight fiercely to make create more attractive loyalty programs but they all turn out to be the same because it’s hard to manage hundreds of different “bonuses” that are not connected to each other – they don’t have a common value and can’t be spent effectively. It creates a problem for both companies and clients and the whole point of a loyalty program is lost. To overcome this issue, the famous drink-a-day app, HOOCH, has created TAP Coin.

First, an introduction for HOOCH.

HOOCH launched their first subscription drinks app in 2015 and offered their members one free drink every day at top restaurants, bars and other places for a small $9.99 subscription fee. Following the major success, Hooch created the BLACK premium program that opens access to different discounts on over 100,000 hotels worldwide, travel deals, concert tickets, celebrity VIP events and many other interesting experiences. Nearly 200,000 members have joined HOOCH since its release date and it operates from Los Angeles to Hong Kong.

What’s the significance of TAP Coin?

What makes TAP Coin unique is not just the successful HOOCH platform that is backing it, but the company’s willingness to implement the blockchain technology that will create a new loyalty ecosystem, one where all rewards are given and redeemed via TAP Coin. This solves the old problem where there was no one common asset or so-called “bonus” that can be spent all across the world in different restaurant branches, hotels, and others.

Moreover, Hooch members will get rewarded with TAP Coin once they make a purchase with their credit card or when they want to share their purchasing data with brands. Even better, when consumers have collected a sufficient amount of TAP, they can use it by themselves or make their friends happy by gifting a drink, food or discount.

The changes don’t end there. As we all know, to attract a customer that will buy something from your store locally or online, merchants are required to spend a significant budget on advertising that usually turns out in low conversion rates that don’t exceed 1%. Such advertising is not always super-targeted and it forces you as the company to spend more money than you have to in order to get a decent result.

TAP resolves this problem as well. As it was described above, in exchange for TAP, users can sell their purchasing data directly to brands, that can then use it to create super-effective advertising that has an enormously high conversion rate of nearly 60% in some cases. The secret to such high conversion rates lies in data that is enriched with small details like customer behavior, traits, habits, times when the customer is most likely to make a purchase and much more. This data is securely sold by members via smart contracts, where customer names are kept private, resulting in advertising that is shown directly in the app, based on customer preferences.

So Why Will This Change Everything?

Considering the fact that TAP Coin features an ecosystem where members can benefit from using TAP tokens all around the world by getting discounts for services, events, and leisure, it will also pay massive dividends for brands who will rely on valuable purchasing data. Moreover, thousands and thousands of new restaurants, hotels, and services will be connected to the TAP ecosystem in the near future and will further increase the value of the TAP token, powered by Ethereum Blockchain technology. We can soon look forward to the situation where we don’t have to worry about dozens of bonus cards in our wallets, as everything will be stored right on our phones and we’ll be able to selectively choose which brand can have the right to use our data for advertising. Loyalty programs will never be the same again – actually, they will be better.

Advertisement
Advertise with us
Read more articles related to this subject:
ETHSponsored
Notice: The information in this article and the links provided are for general information purposes only and should not constitute any financial or investment advice. We advise you to do your own research or consult a professional before making financial decisions. Please acknowledge that we are not responsible for any loss caused by any information present on this website.
Continue Reading... 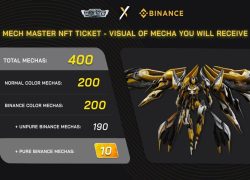