Halving Day: What Are the Chances for Bitcoin to Reach 10,000 in the Near Future?

With the sudden increase in price, Bitcoin has almost erased all its mid-March crash losses. But with the halving, which is scheduled to take place today, May 11th, can Bitcoin reach 10,000 once again?

Expert opinions suggest that volatility in Bitcoin prices will occur after the halving will take place. The cryptocurrency has gained back double its value since the coronavirus panic sell, which impacted all economic markets, rallying up to get back near $10,000 values.

While looking at Bitcoin options contracts on Panama-based crypto derivatives exchange Deribit, data analysts from CryptoCompare, James Li noted that “after the spike in volatility following the mid-March crash, the gradual and steady recovery has led implied volatility to calm down.”

The scientist argues that while short term volatility is expected near the halving, in the long term, Bitcoin prices might not fluctuate as much:

“However, with the strong rally we saw at the end of April, the options market is now expecting more volatile moves leading up to and after halving, regardless of the direction. The longer term expiries, in September and December, haven’t seen as much of a strong reaction, suggesting that volatility is expected to be dampened in the long run post halving.”

“Markets have been bullish since the March lows and this is across asset classes, including crypto,” stated Vijay Ayyar, Luno’s head of business development. He argues that the recent capital injections from central banks around the world have renewed investor confidence, which, in turn, is reflected in the Bitcoin market as well.

“Money-printing by the Fed and other central banks globally have given a lot of confidence to investors that the economy will be supported no matter what.”

Lennard Neo, head of research at Stack AM Pte. predicted that in spite of the recent rally, Bitcoin might correct itself shortly after the reward is reduced:

“In the longer-term we can expect bitcoin to register significant price appreciation towards the end of 2020 and early 2021.”

While there are many predictions regarding what price Bitcoin will have after the block reduction, most investors are generally positive that the price of Bitcoin will increase above $10,000 in the short term.

On May 8th, the price further rallied up, reaching $10,000, but a correction swiftly occurred, losing 9% in a single hour. BTC went down to $8,100 within just 24 hours after the rise, liquidating $200 million worth of long positions, which destroyed the futures market.

The main reasons why this Bitcoin correction happened are thought to be:

According to Joseph Young, when Bitcoin price went below $10,100 on May 8, it showed that it rejected a major resistance level, which prompted a harsh correction in price.

As whales began selling en-masse at $9,900, this triggered a chain reaction of liquidations mostly on BitMEX and Binance Futures.

As rejection at the $10,200 resistance level was confirmed, whales started rapidly shorting Bitcoin on all big exchanges.

“The rapid decline in open interest meant that as selling pressure began to build up, it caused over-leveraged buyers in the futures market to get trapped in their positions.

“The funding rate on Bybit, Binance Futures and BitMEX remained at around -0.05%. A negative funding rate when the price of BTC is going down means that the overwhelming majority of the market is holding short contracts, expecting BTC to drop further.

In other words, many traders, especially whales, betting against BTC at a critical reversal point of a long-term trend triggered a sharp drop in a short period of time,”- concluded the crypto analyst.

In case of a bullish scenario, Bitcoin would be expected to break resistance again and continue to rise in spite of a downtrend line forming on current levels, so that the coin could get back to the $10,000 area.

With regard to the possibility of BTC crashing after the Halving, Christel Quek, Chief Commercial Officer and co-founder of Bolt Global, made the following comment:

“This is an unprecedented time as liquidity remains a priority for investors fleeing equity markets. Therefore, while Bitcoin should rise into $10,000s after the halving, it could be followed with a price drop as investors engage in profit taking. No level of technical support can stand when the economy is drained.”

Charles Hayter, co-founder and CEO of CryptoCompare, stipulated certain reasons as to why he does not believe there will be massive dumping of Bitcoin after the halving:

“The crypto market in 2020 is very different from previous halvings, and the impact of miners selling their Bitcoins differs substantially this time around. This will likely dampen the post-halving impacts from miner selling. The impact of Covid-19 so close to the halving and Bitcoin’s correlation to equity markets means we may not see significant surges in price due to the Halving.”

With most trader speculations focusing on the many ways BTC will be impacted by the halving and the Coronavirus outbreak, a majority of analysts believe it is possible that, in the near future, Bitcoin is certain to reach $10,000 again.

Advertisement
Advertise with us
Read more articles related to this subject:
Bitcoin Halving
Notice: The information in this article and the links provided are for general information purposes only and should not constitute any financial or investment advice. We advise you to do your own research or consult a professional before making financial decisions. Please acknowledge that we are not responsible for any loss caused by any information present on this website.
Continue Reading... 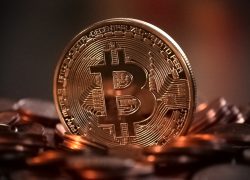 Will Bitcoin Continue to Rise?
The price of Bitcoin has recently crashed. Although it is showing signs of another bull run, many are wondering if this is ac...
Published under:
Analysis
Read More

Why Is a Portion of BTC Made Inaccessible?
If you’ve been around long enough, you have probably noticed how some claim that about 20-25% of BTC is missing or no longe...
Published under:
Analysis
Read More

Will Bitcoin Gambling Continue to Be Popular in Today’s Market?
The price of bitcoin continues to go through the roof. At the time of this writing, the price of a single BTC had gone over $...
Published under:
Analysis
Read More
We Recommend
Advertisement
Advertise with us

9 Ways to Seriously Develop Your Casino Business Among Competitors
By Lorena B. on Sep 21, 2021

EcoWatt: The World’s First Climate Change Governance Token
By Lorena B. on Sep 17, 2021