The Peoples Bank of China (PBoC) held its 2018 National Currency Gold and Silver Work Video and Telephone Conference on March 28th where it was announced that strict cryptocurrency regulations will still be enforced.

Fan Yifei, deputy Governor of the PBoC participated and made a speech that outlined the protection measures which will be taken to secure the value of the Yuan.

Though much of the conference was focused on recognising the PBoC’s accomplishments from the last year, there were other subjects discussed, such as the development of the PBoC’s own cryptocurrency and the regulation of the rest.

As he went on to speak about the protection measure for the value of the Yuan, he discussed at length about identifying and eradicating counterfeit currency in the system as well as needing to “carry out rectification of various types of virtual currencies”

Though he never directly approached China’s controlling attitude on cryptocurrencies, the lack of such mention was characteristic of the government’s strict though often contradictory stand.

China one used to be a dominant market for Bitcoin until they started cracking down on both foreign and local cryptocurrencies. Banning ICOs, crypto related websites and blocking accounts used for crypto trading, are now carried out regularly in the country.

PBoC governor Zhou Xiaochuan has stated very clearly that the country does not acknowledge virtual currencies as it does with fiat currencies saying the “The banking system does not accept it.”

Nevertheless, the PBoC is preparing its own ‘official’ digital currency called DCEP (Digital Currency for Electronic Payment) which will be in progress throughout the year up to 2019. According to Xiaochuan, the currency will be used only to meet the needs of the country, saying that it should focus on “convenience, rapidity, and low cost in a retail payment system while taking into account security and protection of privacy.”

China has even defied the movement that of other countries with rigorous regulatory rules have followed. That of strongly criticizing cryptocurrency while accepting blockchain and distributed ledger technology. Xiaochuan has cautioned that the development of these new technologies could have a negative impact on consumers and lead to financial insecurity.

But crypto and blockchain related research and development have been backed up by the government for years, and just last week a delegation was sent to Australia to study how blockchain can be used to move forward the country’s fintech industry.

It appears that China’s worries are not about the emerging technology but, of the technology that creates an alternative to the Yuan and of the hundreds of billions in lost proceeds that may occur from people sidestepping the national currency over a decentralized one that enables them to spend however they like. 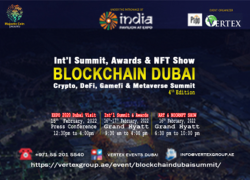 Vertex Events Announces the 4th Grand Blockchain Event at Grand Hyatt Dubai
Vertex Event CEO Mr. Pushkin Agha, who is the driving force behind many successful events for many years in Dubai, has announ...
Published under:
Press Release
Read More

XLM Price Prediction 2022: Market Analysis and Opinions
The Stellar network is living up to its hype faster than investors expected, and these intrigues are shinning shimmering star...
Published under:
Analysis
Stellar XLM
Price at writing: $0.200240
Now: $0.195111 -2.57%
Read More

How to Create Your Own Cryptocurrency: A Systematic Guide
While thousands of cryptocurrencies are currently available, most people may wonder how easy it is to create your own cryptoc...
Published under:
Blockchain Guides & Tutorials
Read More
We Recommend
Advertisement
Advertise with us
Project Reviews